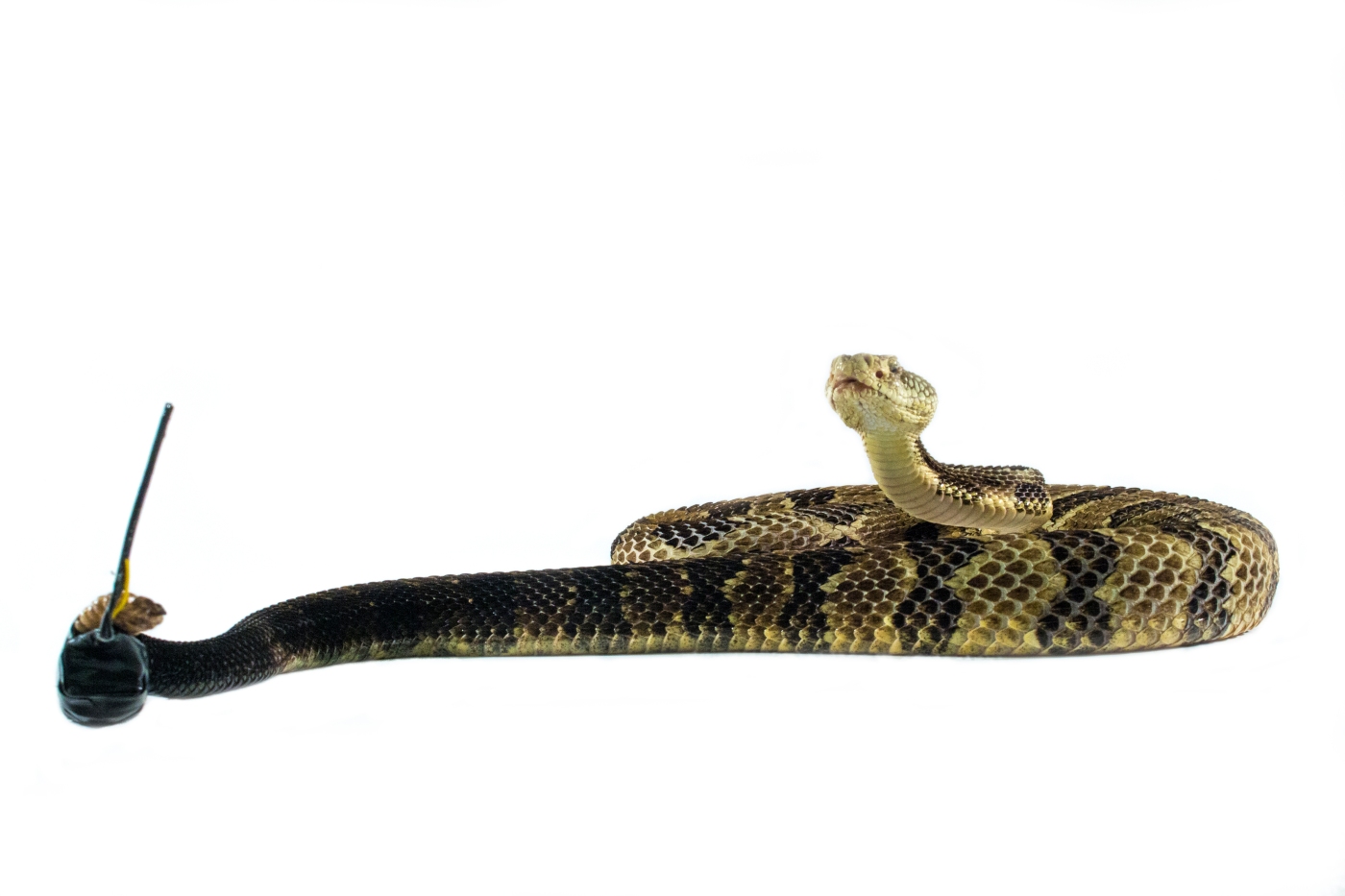 This study is intended to be a long term, multi-stage project. Each stage of the project is designed to have independent significance, yet with the long term goal of combining data from each stage to gain a comprehensive understanding of complex multi-trophic level interactions. But let’s take it one stage at a time…

Stage One: testing and application of GPS snake tracking

The goal of this stage of the project is to successfully track a population of C. horridus using micro-GPS transmitters.

Testing the viability of GPS tracking of rattlesnakes will be carried out in the mountains of southwestern Virginia. GPS units used in the present study will be custom manufactured by Telemetry Solutions.

Prior to conducting field work, GPS units will be obtained and a short term pilot study will be conducted on Eastern Box Turtles, Terrapene carolina carolina. The study site that will be used is a large property in Spartanburg County, SC. GPS units will be attached to the side of the carapace using a five minute epoxy. This work will be carried out in March and April of 2016. The main objective of this pilot study is to determine how well data can be transmitted in closed canopy environments with dense ground vegetation. Experimentation of GPS settings, such as fixing time, number of fixes per day, use of smart GPS and more, will be adjusted to determine the optimal settings for obtaining data and conserving battery life. Furthermore, the durability of these units will be assessed based on weather exposure and other factors.

In the late spring and summer of 2016 field studies will be launched. 10 male and non-gestating female snakes of a single population will be selected for GPS transmission. Individual selection will be based on size (SVL), physical condition, and rattle length. Snakes used for GPS tracking must have a minimum SVL of 85cm, rattle length of 6cm, and weight of 433.33 grams (so that GPS weight will constitute no more than 2-3% of the total body weight).

Once selected, snakes will be captured and GPS transmitters will be attached. Units will be attached to the side of rattles using epoxy and light weight zip ties. The attachment of these units will not harm the snakes nor alter their behavior. Snakes will be monitored throughout the active season to assess the transmission and attachment performance, among other things.

Stage two: The goal of the second stage of this project is to determine if small scale population migrations made by rodents influence foraging patterns in Timber Rattlesnakes. Small mammals are the primary food source for C. horridus (Beaupre et al., 2008; 2009; Clark, 2002; Reinert et al., 1984; Savage, 1967). Clark (2002) compiled data from various studies (Hamilton and Pollack, 1956; Keenlyne and Beer, 1973; Reinert et al., 1984; Savage, 1967; Smyth, 1949; Uhler et al., 1939) and found Peromyscus sp. to be the dominant food source for C. horridus, comprising 20.8% of all meals. The most common food source following Peromyscus was Tamias striatus, The Eastern Chipmunk (10.58% of meals). Some evidence suggests prey preference in C. horridus (Clark, 2004), however these pitvipers have been found to express a diversity of dietary selection (Reinert et al., 2011).

The Timber Rattlesnake is a sit-and-wait ambush hunter (Clark, 2002; 2004; Reinert et al., 2011) that selects specific ambush sites to optimize prey encounters (Clark, 2004; Reinert et al., 1984). Clark (2006) found that foraging C. horridus spend an average of 17 hours at a given ambush location before moving on and selecting another ambush site. Substantial evidence has been gathered indicating that ambush site selection is made based on chemical cues left by rodents (Clark, 2004; 2007). Using the highly specialized Jacobson’s organ, rattlesnakes are able to detect rodent’s paths and thus select highly-
trafficked microsites, increasing the chance of encountering prey items. As studies

continue to gather data on foraging behavior in these snakes, it is becoming clearer that foraging effort is highly specialized yet flexible (Beaupre et al., 2009). Reinert and colleagues (2011) postulate that C. horridus is so behaviorally advanced that they can selectively forage for “prey that can be encountered most effectively in a given habitat” and microsite.

The predator-prey arms race between rattlesnakes and rodents appears to have driven the advancement of specialized physiological and behavioral adaptations. As such, rattlesnakes have become extremely effective at targeting prey species. Observations reported by Glickman and Morrison (1969) and Dertign and Cranford (1989) indicate that variable “movement patterns and activity levels of rodents” can influence predation patterns in raptors (Reinert et al., 2011). Reinert and colleagues (2011) suspect that this may be true with Timber Rattlesnakes as well. In support of this inference, Reinert et al. (2011) report small-scale population migrations in Myodes gapperi, which C. horridus likely is capable of tracking. Timber Rattlesnakes have been shown to select foraging sites based on the amount of rodent traffic that areas receive; thus it is likely that in the presence of rodent population movements which geographically shift rodent densities, rattlesnakes follow such movements in order to forage in areas of greatest rodent density.

However, as Rulon Clark stated, “there is a gap in the literature” concerning the precise relationship between C. horridus foraging routes and population movements in rodents (personal correspondence, 2016). The density of rodent populations can be highly variable and can differ substantially on a microgeographic scale, requiring predators such as rattlesnakes to maintain geographically flexible foraging patterns (Reinert et al., 2011). In fact, in the predator-prey relationship it is often predation that drives rodent immigration and/or emigration (Andersson and Erlinge, 1977). Other factors influence rodent population movements as well, and these other driving factors are the topic of the third stage of this study. 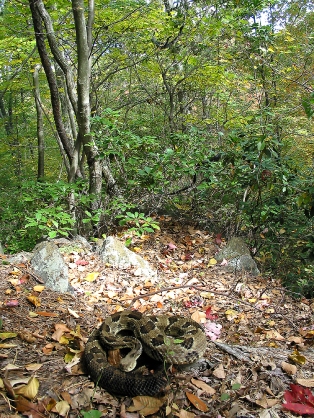 A large Timber Rattlesnake pictured in a typical mixed-hardwood forest. Such forests hare often dominated by a variety of oak species, including Quercus rubra, velutina, alba, and prinus.

Stage Three: The third component of the project will investigate the inter-trophic level interactions present in oak-dominated forests. The relationship between oak mast fluctuation and the fecundity of rodent and rattlesnake populations has been studied (McGowan and Martin, 2004). However, the masting data used in this study were based on widespread relative acorn abundance reports from public agencies, and not from the sites where snake populations were surveyed. Furthermore, some rodent trapping was conducted, “but not enough to know rodent densities definitively” (McGowan, personal correspondence, 2016). The above-mentioned study, along with several others (Anderson and Erlinge, 1977; Beaupre et al., 2008; 2009; Clotfelter et al., 2007; McShea, 2000; Reinert, 1984; Reinert et al., 2011), warrants further investigation of these ecological relationships.

As this part of the study will not be undertaken until ~2019, the objectives and primary questions addressed in this stage will likely be subject to modification. Thus, further explanation of this stage of the project will be provided at a later date.